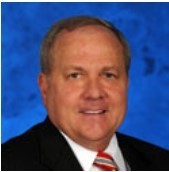 Deshler Public Schools is excited to have Lt. Colonel Jan Frye as our guest speaker at our Veterans Day Program on Friday, November 11th, at 10 AM.  U.S. Army Colonel (Retired) Jan Frye is a native of Chester, NE.  He graduated from UNK in 1972 as a distinguished military graduate, receiving his Army Officer Commission upon graduation.

Frye entered active duty in 1973 and served in Korea as his first duty assignment.  He served in numerous and varied leadership positions during his 30-year military career, including assignments in ten states within the U.S. and on multiple tours in Europe and Asia.

As a senior officer, he served as the:

In addition to his undergraduate degree, he holds Masters Degrees from:

He is also a graduate of the Army's Command and General Staff College, the Defense Systems Management College, and the Industrial College of the Armed Forces.

He retired from active service in 2004, and among his numerous awards and decorations, include the:

In 2005, he was selected to serve as a member of the Federal Senior Executive Service in Washington, D.C.  While in that role, he served as the Deputy Assistant Secretary for Acquisition & Logistics, Department of Veteran Affairs.  He was responsible for all acquisition and logistic programs in one of the federal government's largest cabinet-level departments, encompassing over $30 billion dollars annually in total expenditures.

In October of 2011, President Barack Obama appointed him as a commissioner on the U.S. Ability One Commission.  Mr. Frye continued to serve on this White House commission for seven years under both President Obama and President Trump.

In 2018, Frye retired for the second time.  He and his wife Carrie moved to Gretna, Nebraska, where they enjoy helping to raise their two grandchildren.