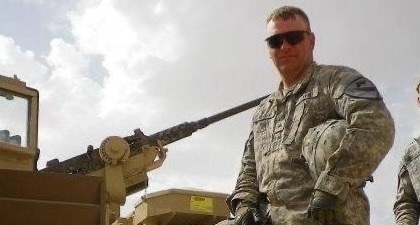 Staff Sergeant Sam Hansen, a 2000 Deshler graduate, will be the guest speaker for Friday’s Patriot Day Program at Deshler Public Schools on September 9th. The public is invited to attend this program at 9 am where K-12 students will also present their service projects, the eighth graders and seniors will present work they have completed in their social studies classrooms, students in grades 4-6 will sing, and three high school students will perform Taps and sing the Star Spangled Banner.

Once 9/11 happened, Staff Sergeant Hansen wrote a conditional letter of release from the guards to transfer to active duty, which was granted, and he was then assigned to Fort Hood, TX in April 2002.

In March of 2003, his unit was put on orders to deploy to Iraq.  His first deployment was in March 2004 to Baghdad Iraq to be overall security for the International Zone to protect the embassies and the new Iraqi government.  Staff Sergeant Hansen returned home in March of 2005.

In October 2006, he was deployed again, this time with his unit being sent to Samarra, Iraq as a reinforcement force to help the 82nd Airborne division counter insurgency against Al qaeda and ISIS.

Serving more than a year, he returned home in December of 2007 after a long and very hard deployment.

In 2008, he re-enlisted to Fort Riley, KS, where he spent 4 years and, he was once again put on orders to return to Ft Hood,TX.

Once in Diwaniya, Iraq, Staff Sergeant Hansen was security on the MSR (main supply route) Tampa as the US military exited Iraq to end the war.  Once his unit was closed down on their base in Iraq, orders were received to remain in Kuwait for 6 months as a quick reaction force for the Middle East.

We are incredibly humbled and proud to have Deshler alumni and Staff Sergeant Sam Hansen here for our Patriot Day Program, who has proudly served our country for 14 years and 5 months.  Thank you, Staff Sergeant Hansen.